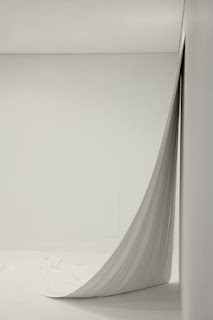 It was not just the link to dividing up the imaginary space which exists between the narrative of painting and its process but the artists approach which created a thematic subject – and that was an understanding and disruption of high modernism.

Of course – we cannot bypass the whole scope of the intrinsic power, relationship and deconstructed-formal element which the artists establish. The exhibition by its very title REAL PAINTING is suggestive of a state where the painting exists as a sculptural process than an imaginary one – devoid of the metaphysical.

Adriano Costa’s kaleidoscopic installations respond to the irrationality of the neo-concrete movement which occurred in his birthplace of Brazil – of course, he disputes any form of ideology in a metamorphosis of the neo-concrete’s coherent manoeuvre into the future of creative exploration. Making a deviation from art-historical tradition and putting an emphasis on the vernacular nature of the object.

Angela De La Cruz gave us a wall mount cuboid nothing dissimilar to Judd (Compressed 1 (White)) – only to be broken and crumpled from the base – allowing us to witness the material, its components and action to release it from true form. And likewise throughout the exhibition, there is this connection where the two-dimensional space, the expectation or the confines of tradition is fragmented and allows us to view and become intimate with the work.
This discourse – which seemingly brings together the exhibiting artists, such as Costa, Gilfford and Covell – forgets about the hegemony which is implicitly attached to high modernism. They inform us sculpturally whilst representing the familiarity of painting and how the audience reads the image. The show looks at how the audience collate and recognise the structure of painting through its history, and then it strips it down.

The artists do not provide us – the audience – with a reason; they do not want to allow us into a concrete and formal assembly – or set of ideologies. Rather, they provide us with the satisfaction of construction and reconstruction, of being materially apparent – which has in itself its own power to redefine the limitations. 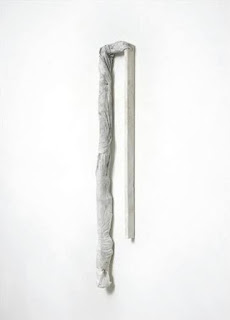